As you may have gathered by now, I am not a believer in a “higher power,” with the exception of Oprah.

As I sprung out of bed early this morning filled with a new religious fervor, I remembered I had pontificated about Easter a few years ago.  I decided to resurrect that piece this morning.

I’ve done some remodeling to reflect my improvement in writing skills but kept the overall theme, which I think really keeps the reader hanging.  Hopefully this will help me gain more followers.

I think I nailed it, don’t you?

Easter is a very important holiday to me.

Not only am I am fascinated with the whole Jesus/crucifixion/resurrection story, I have an unusual fondness for hard boiled eggs and Mr. Patience and Understanding is obsessed with deviled eggs.

On Good Friday (and when is a Friday not good?) I sat with my friends Erin and Mary and we all tried to hash out the Easter timeline.

Before you assume I have formed some sort of bible study group, please note that this conversation took place in a nail salon before we proceeded to happy hour. Everyone should get a mani-pedi to celebrate Christ’s ultimate sacrifice, don’t you think?

Mary is the only Catholic in our group, and Erin follows a religion that worships Chardonnay on the cross and a pack of Marlboro Ultra Lights on the altar.

I know this because I recruited her to my church, you see.  I’m a deacon. 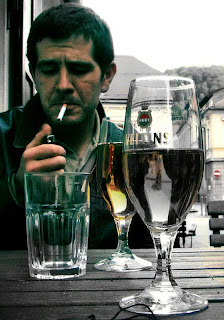 Anyway, with Mary being the only one amongst us who knows anything about this holiday, we peppered her with questions:

“Why don’t you have the ash thing on your forehead?”

“Um, because we do that on Ash Wednesday and today is Good Friday.”

“Oh! So today was the Last Supper, and it was really yummy, so that’s why they call it Good Friday?”

“Noooo, the last Supper was the night before the Crucifixion, which was on Friday.  That’s why it’s called Good Friday.”

“Ok, I am confused. First of all, that doesn’t sound like a very Good Friday to me. I’ve had some bad dates and bad mushroom trips on Fridays past, but nobody ever nailed me to a cross and made me stay up there until I died.

“What’s up with calling it Good Friday? Should be Really Shitty Friday if you asked me.”

“And another thing, how long did it take for him to die up there? I assume they came for him sometime in the morning, right? I doubt the Romans got up especially early to pick up JC for his appointment with the more nasty side of government.

“So say they arrive around 9 a.m., do the whole ‘banging on the door, get yer ass out here Jesus schtick,’ take him to Golgotha (which is NOT located in a central part of town so during rush hour this probably took at least an hour), and hoist his petard up there.

“I’m sure the nails in the hands and feet sped things along, but wouldn’t it take him a while to die up there?”

We all looked down.

Chow was one of our nail “technicians” and I had no idea she had been listening to our conversation.

I wasn’t even sure she spoke English, but she rubs a mean foot and paints a pretty toe.  So long as she doesn’t try to do a French manicure on me (these are forbidden by Mr. Patience and Understanding for reasons I can’t get into), we get along famously.

“Assuming there was very little traffic on the road that night, his buddies MIGHT have been able to slot him in the cave by midnight.  Maybe.”

I think I may have offended her, which concerns me, because I truly make it a habit to never offend anyone, especially with something I have said or written. My sensitivity towards others is my finest quality!

“My point is, ladies, if he died late Friday night and he came out some time Sunday, how is that three days? It’s really more like a day and a half.”

Chow and Mary chimed in simultaneously:

Those of you who are wondering if “misnomered” is a word: I wondered too.

Then I realized that this is my damn blog and I can create my own vocabularity (rare words) if I want to.  Remember “Sadoschadenfreud?”  Of course you do.

In Conclusion: An Incredibly Tasteless Joke

A little boy is standing on top of a cliff, looking down at the sea and crying his eyes out. A priest approaches and says, “My child, why are you so upset?”

The little boy turns to him and says, “My mummy and daddy were in their car — and it just rolled over the cliff and smashed on the rocks down there.”

The priest slowly looks around him while unbuttoning his cassock and says, “It’s just not your day, is it?”

Daughter Wants to Stay a Virgin Until Marriage

Dear Ask DesCamp: I am fully aware that this question sounds very odd so let…

Religion is the Root of all Evil

Dear Readers: I woke up this morning, as I often do, happy. The coffee was…

Welcome to Friday Feedback, our nearly-weekly submission to the spanking delivered by readers which we…